A downloadable game for Windows and macOS

Stranded in the remote cabin that was supposed to serve as a weekend getaway, recent high school grad Nick is on his own to explore the surrounding backwoods.

Unfortunately things take a dark turn when he stumbles upon a gruesome scene.

Accompanied by two new local acquaintances, Nick’s first goal is to uncover the mystery of what haunts the woods. His second is to survive it.

Unearth secrets hidden between the trees.

Confront what awaits in the darkness.

Whatever transpires, you’re guaranteed to be up all night.

Loving the art style and the story of this game!! (Edit: Thank you! I found the true ending and all the pictures with it! Such a perfect ending. I can tell so much thought and love went into this game. Also, no matter what you're going through, there is help and hope for you <3)

Thanks so much for playing Up All Night! We're glad you're enjoying the art and story.

Our writer certainly didn't make reaching the true end easy, but our best hint for getting there (and unlocking the three remaining illustrations) is to examine everything.

Hopefully this helps! If you're still struggling, feel free to reach out again, and we'll do our best to come up with another tip. Cheers!

Played through the demo for Spooktober. Here's a highlight of the stream I had for that. Looking forward to trying the full game out soon! https://www.twitch.tv/videos/768998545

Hey, thanks so much for streaming our demo, marimoVN! The game has improved a lot since then (yes, we actually have working settings, now, haha).

We look forward to you playing the full release, and hope you'll come back to share your thoughts with us!

I really don't like writting comments in English but I'm amazed by this game and the whole story and I felt that I need to tell you that.

I really had a lot of fun playing this game and achieving all the endings (my favorite was of course true ending and bad end 3). This game have perfect amount of mistery, secrets and great characters. The plot is really interesting and suspenseful

I'm glad that I found this game. I look foward to play your another games.

Thank you so much for your kind comment, Alesial! That means so much to our tiny team!

We're thrilled that you enjoyed Up All Night enough to unlock all the endings, and we look forward to you checking out our future games. I'm not sure about a sequel, but our team has been talking about writing some origin stories for the characters, so hopefully you'll stay tuned for those... they should prove very interesting! ;) Thanks again!

(I really like bad end 3 too. It might be my favourite... after the True End, of course!)

So I jumped aboard the full version today and let me tell ya, it was a blast to read through! The story was able to really grip me past the point of where the alpha demo ended and the reveals were all built up pretty well thanks to closer observation of certain areas  and characters through the game. I won't say anything further but the true ending is just *chef's kiss* the right amount of bittersweet!

Kudos to the team for this and any future creations down the game dev road!

We're impressed you managed to make it to the true ending... our writer definitely didn't make it easy. ;)

Thanks so much for playing! We're absolutely thrilled that you enjoyed it. Your prior comment proved invaluable in bringing the full release to fruition, and we definitely hope you'll keep up with our future releases. Cheers!

Thanks so much, river! When the time comes, we hope you'll give us your thoughts on the full release!

At the start of the Spooktober Jam, I discovered the first sketches of the main cast of characters for your project while browsing through the hashtag for the jam. The concept of battling inner demons while solving a murder mystery was what drew me to your game as I'm a big fan of Occult Crime Police (which has a more comedic bent to it and is more spooky than out-right horror) and anything that has a strong focus on its narrative.

So I downloaded and read through the alpha demo today. Here's my thoughts

-  I like how the slow reveal of what occured 4 months prior to the game's start plays out during Nick's first night in the cabin and if he chooses to look at the dead deer after he meets Grayson.

- Felix has quite the ominous air to him despite his courteous and dapper appearance. Definitely keeping my eye on this guy.

- Grayson is quite an oddball but has a fun personality and I see a lot of myself in her. Now I'm curious about her backstory

1. Will you be adding more options to the main menu (such as settings , extras and quit) in the full release plus a CG gallery and ending reference guude in the extras?

2. I think the title screen and other menu pages would look better iwith a dark grey or black color scheme with white or bright red lettering for the options to fit with the drama oriented mood of the game.

3. How many good and bad endings (no spoilers)?

I will return with a review of the full release when it comes out! Here's to you guys for drawing me into such an interesting story!

Thanks so much for your comment... it means a lot to us as first-time devs!

It's awesome to hear that you've been excited for this project from the get-go. We really appreciate your initial thoughts.

1. We will definitely be adding more options to the menu. There will be a quit button at the very least (hilarious oversight only realized after assembling the demo), and our programmer is hoping to set up a CG gallery along with a configuration menu. We will be releasing a guide to completing all the endings alongside the full release, though it may be as a separate download.

2. We've actually been considering making some changes to the title screen and menu to make them more dark and ominous. The fact that you bring this up strengthens the case! We appreciate the suggestion, and will definitely take it to heart.

3. There are six bad ends and one true end.

4. The full release will be free with an option to donate.

Thanks again for providing us your first impressions! It's wonderful to get feedback, and extremely helpful in bringing the full release to fruition -- and any future releases we might have. When the time comes, we look forward to hearing what you think of the full release! Cheers! 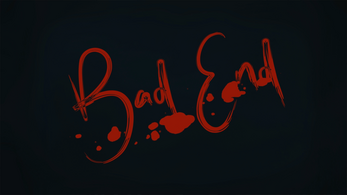