A downloadable game for Windows, macOS, and Linux

Years after the events of Up All Night, Nick Torres remains haunted by the ghosts of his past. Seeking help -- or at least solace -- he reaches out to licensed therapist Patricia Rathburn for guidance.

Much to her dismay, Nick's presence proves a harrowing reminder of Patricia's own inner demons... but can she see past her clouded judgement to help this troubled young man?

While Rumination may be enjoyed on its own, we encourage players to check out Up All Night -- a serene murder mystery/horror visual novel -- to which Rumination is a direct spin-off.

Rumination can be considered an interlude between Up All Night and its future sequel, currently in production.

In more serious note, congrats on this release and the Steam one! I like how the narrative is unveiled and letting reader piece the hints sequentially. The outsider view of events versus what player knew in previous story and the subtle change of Nick's reaction help there, I guess. Also, there will be another sequel? Can't wait for it!

P.S. Poor Patricia being the victim of circumstance here, and between cackling or feeling "Thanks devs, it doesn't go that way" on that one bad ending of Nick and his therapist's...professionalism.

I am going to be warning about Spoilers in my thread; just in case.  I don't think I got too explicit in my comments, and this is basically a sequel/spin-off of "UAN"/the first game, so my "spoilers" shouldn't be an issue for too many people playing this VN, but just in case there might be spoilers in this thread, so read this thread at your own risk.

So I have also played the first game of this series on Steam.  I just finished it; I bought it on Sale.  I loved it a lot.  I also really adore Nick a lot; he was awesome playing as; liked getting into his head and mental state, and is a really interesting and complex character.  I am sure he will just as interesting from an outside pov (outside pov's can be so fun to write and read).  I am excited to see more of him in this game (Rumination) and UAN 2.

I am also excited to see other (new) characters as well and stuff; that scene at Nick's dream bar at the end of UAN 1 also hinted at learning more about Felix (I think), so I hope that as well.  I am guessing that was the 1,000 (+) words bonus scene only available in the remaster?  I ask that, because while I have seen some stuff of the non-remaster version, I have only ever played the remaster version.  It is cool you can unlock an extra scene (kind of like an epilogue of the game; which are nice) from the gallery after you get enough ending(s); it was a nice/cool reward/thing.

Anyway, besides what I have already said; I will also write a longer review either here or Steam later for UAN (which I have already finished and have got all the endings) and UAN:  Rumination (which I haven't really started playing that much at all really, because I needed to say something before I really got too much into this game/VN), but first I just need to say something(s).  Those being; when playing the game; when trying to use the history option/tab (which; I always really like in stuff like this, and was useful in UAN 1), I got some kind of error that might need to be fixed in the future.

Here, I will show you a couple of screenshots of the error/exception in the reply(ies) to this comment.  I don't want to clutter the main/fist comment w/ images my thread w/ images, and it looks like I am having some trouble linking images.  I am trying to upload 2, but I can only seem to upload 1, so I am going to try to upload/post those images in replies and hope that makes it so I can post 2.  If I still can't 2 in the same comment; I will just post more than 1 reply I guess.  Sorry about that.  Ok.  Moving on to that now.

We just tested the build, and you're completely correct... the history screen is malfunctioning. Sincerest apologies! We can't thank you enough to bringing this to our attention, and will do our best to get this error corrected in the next day or two. Thank you again!!

Aside from the issues with Rumination, we're thrilled that you've enjoyed Up All Night. Yes, the bonus scene is only unlockable via the Remaster, and only after you've achieved all eight endings. Congratulations on getting there! We don't want to spoil too much, but there will definitely be some Felix-centric content in the future sequel, directly related the vague info unlocked in the bonus scene. (And yes, in case you're wondering, Grayson will get more, too!)

Thank you again for playing. We'd love for you to leave a review for UAN on Steam and on itch if you're up for it. Your feedback means a lot to us, and we're always working to improve our content in every way we can.

Thank you again for playing, and apologies for the setback... we'll work to get it fixed right away!

Howdy again! Just wanted to let you know we've updated the history screen and it should now be fixed.  You'll need to download the newest version of Rumination in order to play with the update. Thanks again for bringing this issue to our attention!

Just came off playing Rumination. As a fan of the first game, the writing and artwork are very well done as it was in the original. The lead up to that ending, boi...I saw on the main page that you guys are in the process of creating the finale to what has become an amazingly written trilogy of games. I really wanna know what happens to Patricia now and how the heck Nick is going to be able to get out of this situation!

P.S. I know the third and final installment of the UAN trilogy is in pre-production at this time but without giving much away, will players be seeing the story again through Nick's or Katie's POVs?

Thanks so much for your comment... it means the world to us that you've stuck with the series the past year, and we really look forward to hearing your thoughts on the sequel once we finally get there. We've still got a long journey ahead of us!

Without giving too much away, we can tell you that the final installment will follow a new protagonist, yet unintroduced in the series... though Nick will be playing a very large secondary role, and Katie will most definitely make an appearance. In fact, keep your eyes open for some Katie concept art for the sequel... we've been getting a lot of requests for her!

You guys did such a good job!! I liked seeing Nick again (although poor guy needs a serious break in life). The music and the narration did a very good job sucking me into the story. And though I am suspicious of Patricia, I did like the framing of the story through her. It was interesting to see Nick on the outside and not continue to follow him on the inside, if that makes sense.

In any case, loving it! Can't wait to see you guys do more!

Our composer definitely outdid himself with the soundtrack for this one, and we're thrilled people are embracing the new perspective we're shining on Nick. The poor man has been through a lot, and we wanted to explore what that might look like to someone on the outside... although yes, many people have noted they find Patricia very suspicious. ;)

Thanks for playing! We hope you're looking forward to our future sequel, currently in the barest bones of pre-production. Perhaps there is a brighter future out there for Nick, after all...

This was a thrilling read! As someone who's played the original UAN, it was interesting and also heart-breaking to see how Nick's character has evolved between the games. I loved all the detailed descriptions of his appearance and mannerisms and everything - together with the very expressive sprites he really comes across like a real person. The eerie music really helps, too!

I also liked the newly introduced characters a lot. It was smart to have someone other than Nick as the narrator - we got to see what a "normal" person sees when they interact with him. I mean, I already knew that man is a mess, but it was honestly scary to see just how big a mess he is (/has become).

I can't wait for your next game! I hope you all know you're making amazing stuff.

Thanks so much, Cryos! Your kind comment means so much to all of us.

Nick has certainly had a rough go of it... but there is a light at the end of the tunnel, as we're currently in the very early stages of pre-production on a sequel, where things -- while not perfect -- may start looking up for him. Possibly. A little.

Writing from a perspective other than Nick's was certainly a challenge for our writer, but she nailed it. We're thrilled to see other folks are responding well to the new point-of-view... especially when observing someone as troubled as Nick.

Thanks again!! We can't wait for you to play out next game. ;) 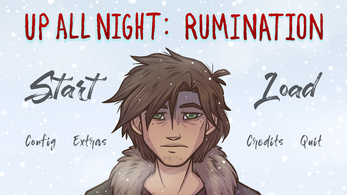 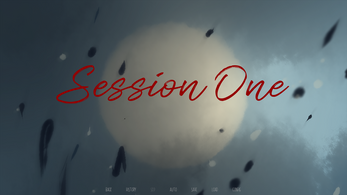 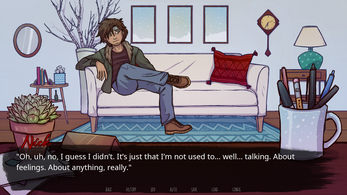 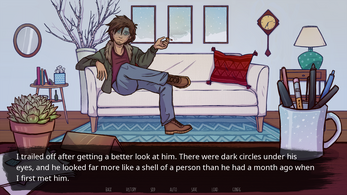 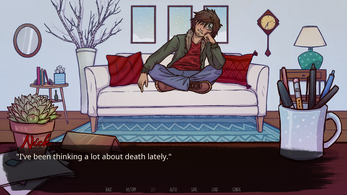 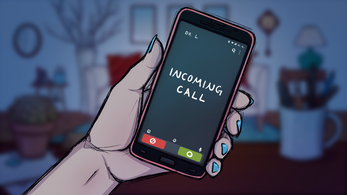